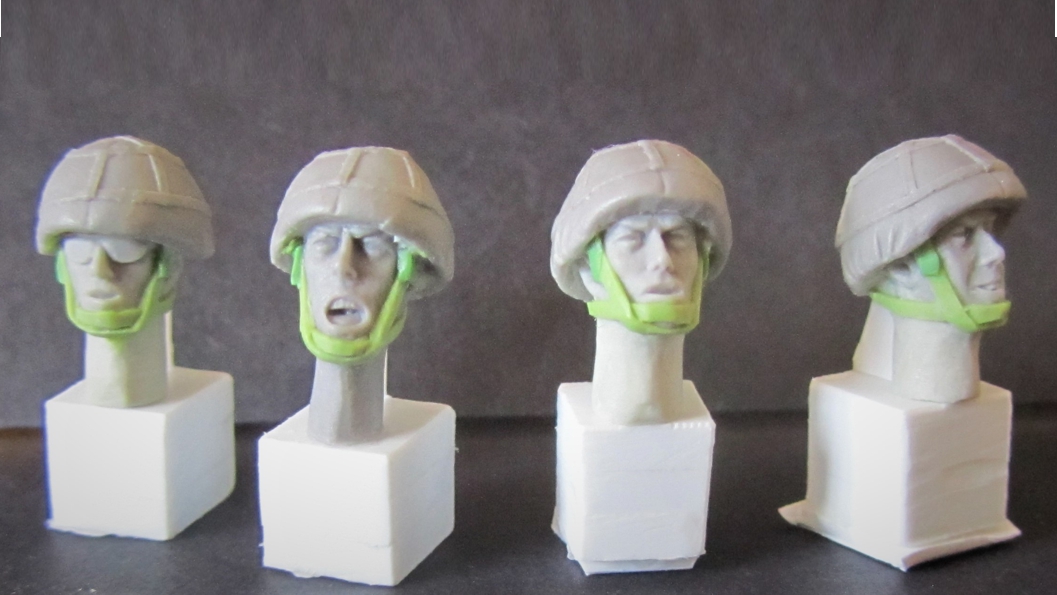 Nobody here at SylCreate would claim to be a climate scientist or Greta Thurnbeg. But summer does seem to be getting warmer. And this can present challenges to scale model makers, sculptors and creators of table-top fantasy miniatures given the impact that heat and hot weather has on epoxy modelling putty and casting resins.

How can the summer weather, its speeding up of cure times and its tendency to mess with the properties of epoxy modelling putties be overcome? For hobbyists, the answer might be taking a break from their model making by swapping the workbench for a pub garden or beach until the temperature cools down.

For those who sculpt for a living, those options are less viable. Unfortunately, business and cannot just stop because the sun is out. That means that the leading model makers have to find ways to work around the heat. We asked Kevin Adams from Goblinmaster Ltd and Paul Wade of Red Zebras Models for their hints and tips for using epoxy modelling putty in the summer heat.

A damp sponge, an air cooler and a lighter touch with “maddening” Green Stuff

His goblins, orcs and other fantasy creations have taken on legendary status over the course of a near-40 year career. And yet even a man as talented as Kevin ‘The Goblin Master’ Adams describes using Green Stuff in the middle of a heatwave as “sometimes maddening”.

Green Stuff is formulated to be sticky. Its stickiness, malleability and penchant for holding the finest of details is what makes it so popular. It is an epoxy modelling putty which takes time to get used to and can be difficult to work with even in winter – so imagine what it is like in 30°C heat.

“Working with Green Stuff in high temperatures is something that has to be mastered,” says Kev. That starts the minute you take it out of the package and begin kneading the yellow and blue parts together, at which point it can already be sticky enough to want to adhere to everything it comes into contact with.

“Mixing Green Stuff without it coating thumb and fingers can be avoided by wetting them beforehand. I use a damp sponge from a blister pack, and dip my sculpting tools in as well to avoid the putty sticking to them. That is one thing I would definitely recommend.”

The recent hot weather has seen Kev undertake new measures to reduce the temperature at his work bench. “I have started using an air cooler on the side of the desk. It has a top tray which can contain ice water and I aim that at the putty I have mixed. It keeps it fresh, less sticky and prolongs the curing time.”

Even with Kev’s new cooling system, he still has to take a more delicate approach when using Green Stuff in summer. “It needs a much lighter touch than usual. Trying to roll it on my Formica desk is impossible, it just smears and won’t roll. The smallest parts are the most difficult. Rolling tiny balls for rivets and they just smear on fingers.”

“Perseverance is ultimately the name of the game. It is not impossible, just challenging. You spend longer working as you can only make smaller parts due to the faster curing.”

“In winter, I will make a dolly from copper wire and model the legs and upper body in one go as the putty is workable for two hours. In the summer, you struggle to even get the legs done due to the putty curing quickly.”

“I think it is a case of having to adapt to the heat to be honest. If I don’t make any models, then I don’t have any money. It’s as simple as that.”

Heat to overcome the heat for Magic Sculp

Magic Sculp is a much easier epoxy modelling putty than Green Stuff to shape, manipulate and work with in the heat of summer. It cures to a cold, hard feel like ceramic.

That makes it much less sticky. Sculptors wanting an ultra-smooth finish should be wetting the putty as they go, and Kev has already pointed out the benefits that can bring in hot temperatures.

The biggest impact that heat has on Magic Sculp is to speed up the curing time. Having spent many years living and working in the United Arab Emirates and Qatar, Paul Wade is no stranger to dealing with hot temperatures. Even a roasting British summer pales into comparison to the 49℃ he would regularly experience in the Middle East.

It was his time in that part of the world that inspired Paul to set up Red Zebra, a military scale model company which focusses on wars from the Middles East rather than more mainstream conflicts like World War II.

He also learnt whilst living in Doha a trick for extending the cure time of Magic Sculp. This may come as a little bit of a surprise, but Paul says the secret to overcoming heat is to use more heat.

“When I can feel my Magic Sculp getting slightly harder and beginning to cure before I have fully worked it, I heat it with a hairdryer for a few seconds. The small blast of artificial heat actually softens it, giving you an extra bit of working time. If you use a hairdryer on it for too long it will start to cure faster, though.”

Paul also uses casting resin to create copies of his masters. Like putties, resins will also cure quicker in a heatwave. His advice for casting and moulding in the summer? Start early!

“When it is really hot, it is not unknown for me to be out there at 5am in the morning casting. By the time it gets to 9am, I have to stop for the day. I used to keep polyurethane resin in a small fridge, thinking that it would help maintain the cure time. When that fridge gave up, I did not replace it and kept my resins at room temperature. I never really noticed any difference.”

Epoxy modelling putty in the fridge – effective or an old wives’ tale?

Ah, the infamous fridge question. One of the most frequent enquiries we get asked during the heat of summer is whether putting epoxy modelling putty in a fridge or freezer can make a difference.

Who better to ask than Kev and Paul whether storing Green Stuff and Magic Sculp between a cucumber and a bottle of mayonnaise is a worthwhile exercise or an old wives’ tale?

Neither seemed particularly enamoured by the idea. Paul responded with: “I wouldn’t resort to putting Magic Sculp in the fridge, no.” Kev meanwhile said: “Putting Green Stuff in a fridge is not worth the bother. By the time you have taken it out and moved it to your desk, it is going to have warmed up anyway.”

Kev though did have one piece of advice involving Green Stuff and a household appliance. “Occasionally, I get called by my partner for dinner when I am in the middle of a model. If I have not finished a bit of detail, I put it in the freezer and it keeps it in limbo for when I get back.”

“With really delicate detail, I will sometimes put Green Stuff in the freezer first. It means the putty is very stiff for the first five minutes, which is great for doing teeth and eyes.”

Milliput also advise that their putties can be put in a freezer should interruptions occur when working with them. The freezer will keep the products at the same cured state for up to 36 hours. When you are ready to resume work, remove the Milliput, warm it with hands, and it is ready to use again.

Green Stuff? Magic Sculp? Or both alongside Geomfix in our Modelling Putty Kit?