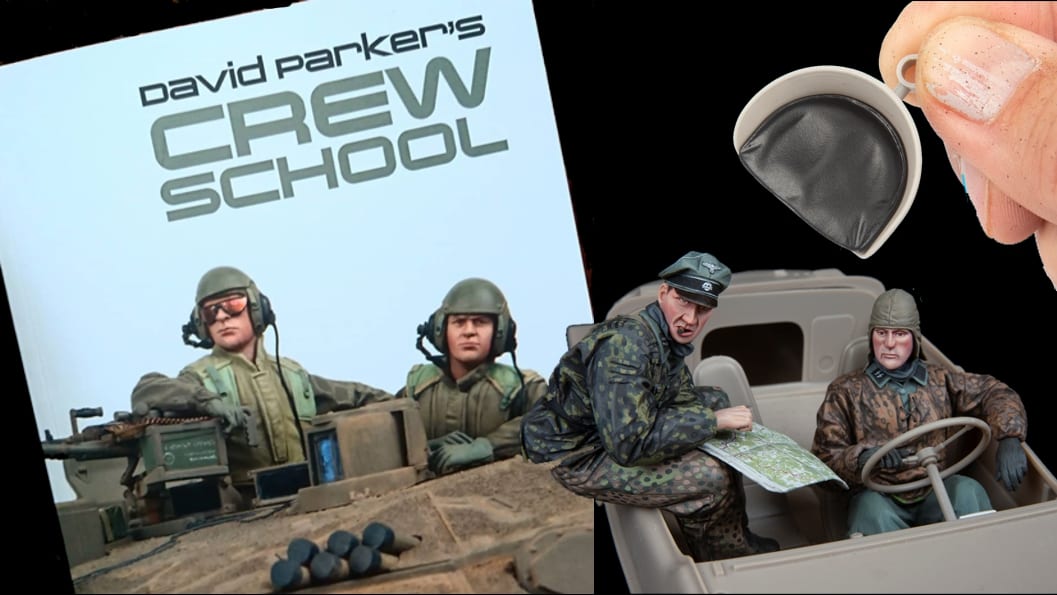 Good peer pressure is when an award-winning model maker is convinced by his friends to write a book which shares his secrets. Which is exactly what happened to David Parker – with the result being David Parker’s Crew School, a must-read for anyone with an interest in producing tank crew figures.

“The inspiration came from some fairly persistent demands from friends that I should put together a guide to my figure techniques,” David explains. “I have always felt that a unique or individual crew figure will lift a model and I am aware that for many, the idea of even painting a commercial figure is simply too daunting – let alone sculpting, converting and adapting one.”

Which is what David does, as a glut of international awards is testament to. It is also why his AFV Modeller Magazine has been going strong for approaching 20 years now.

Like most, David’s model making journey began as a child with model aeroplanes. When he went to University in the mid-1980s to study Fine Art, his modelling was put on hold due to being “more interested in beer and girls.”

Once David graduated, he got back into model making whilst working as a graphic designer at his own advertising company. David wrote for various UK modelling magazines throughout the 1990s at the same time as expensive model making magazines from Japan would frequently arrive at his office.

David preferred these Japanese publications because of the vastly superior quality of their photos – even though he could not understand a word of what was written inside.

It was at that point that his business partner asked what would turn out to be a life-changing question: Why didn’t he do an English magazine in the same way that the Japanese do? AFV Modeller was born and began publication in 2001. The advertising business was soon shut down as all efforts went into the magazine and four years later, AIR Modeller was launched to deal with the aircraft side of modelling.

“AFV Modeller magazine as a very different style of modelling magazine aimed at the serious end of the hobby,” explains David. “The focus was always on quality and graphic presentation.”

That mantra is evident throughout David Parker’s Crew School book too. It is a 112 page guide which features high-quality photos and easy-to-follow instructions for painting and customising figures to create totally unique tank crew.

“Possibly the biggest barrier to the modeller using crew figures is the idea that they cannot paint faces,” says David, who then spends the first 10 pages dismantling those barriers, including the challenges which come with moving up in scale, where more detailed painting is required for greater realism. “That’s why the book begins with painting and what I hope is a good, solid base for techniques so that readers can master it.”

After tackling face painting, David moves onto uniforms. Achieving the exact colour required for plain uniforms is made to seem easy. Even getting camouflage right appears simple thanks to the detailed breakdown that David provides.

Once painting is dealt with, David moves onto explaining the differences that position can make to a tank crew. “Small changes to a uniform or the pose of a figure can give it that unique edge. In the book, I wanted to show how to change poses by, for example, repositioning an arm.”

Repositioning an arm is one thing. Next, David deals with sculpting entirely fresh body parts and accessories and using them to adapt existing figures. Over the course of the book, figures receive new arms, heads, hats, shades, belts, straps, insignia, body armour, additional clothing, and items in their pockets.

By adapting figures in this intricate way, a completely new tank crew can be created. David says that these adjustments present “ambitious changes before tackling fully sculpted figures for the more experienced modeller.”

These fully sculpted models are created with the help of mannequins in 1:16 and 1:35 scale. David explains how to develop figures which can suit any scenario, bringing to a close the tutorial section of David Parker’s Crew School.

Over the remainder of the book, David shows how he has employed these techniques on various tank crew projects. The last of these projects is the recreation of a scene which will be familiar to many model makers; the famous image of a crew consulting their maps at the Kaiserbaracke road junction on the N23 road between St Vith and Malmedy during the Ardennes Advance of 1944-45.

David uses his 1:16 mannequins to model the crew for the Eduard Schwimmwagen, detailing each step in the creation of the figures through to the completed model, which is then photographed outdoors in fading winter light with a background of conifer trees.

It perfectly captures the mood of the original photos and is a striking way to end, pulling together all the techniques and advice that have been poured into the book in the preceding pages.

The result is a book that explains and then demonstrates, ensuring that it offers something for everyone – beginners will learn invaluable lessons and more experienced model makers can benefit from the tips and tricks that David has laid down in print.

The book finishes with an appendix in which David lists the products and equipment that helped bring his figures to life. It is a nice touch and allows the reader to learn a little more about the preferred tools of a leading model maker.

His putties of choice are Green Stuff and Magic Sculp, two SylCreate products which he dedicates two pages towards extoling the virtues of. He also explains why he uses Swann-Morton 10 and Swann-Morton 10A blades for carving and trimming. There is even an adapted kebab skewer listed for sculpting – perhaps another throwback from those student days of beer and girls?

“The approach has been to try to demystify the processes and to encourage the modeller to try new techniques with a guide to tools and sculpting putties.” And David Parker has certainly succeeded in that aim with David Parker’s Crew School.

It is an excellent step-by-step guide to getting the very best out of tank figures. Not only that, but it is genuinely entertaining too – and there is no better way to learn than when it is fun. Let us hope that David’s friends can pressure him into writing more books in the future.

David Parker’s Crew School is available to buy from the AFV Modeller Website, where you can also subscribe to AFV Modeller and AIR Modeller Magazines.

Share this article...
Category: Blogs
Leave a Reply Cancel reply
Cookies are used to ensure you are given the best experience on our website. By continuing to browse the site you are agreeing to our use of cookies.OkPrivacy policy