Sticky putty supplied in a 90cm Reel. Has a smooth cut used for highly detailed pieces like fantasy wargame and for military insignia

Green Stuff is used for detailed model making with the reel format providing the modelling putty in an easy-to-use 90cm (36″) strip.

It is sticky with a smooth cut which holds fine details extremely well. This makes it popular for sculpting fantasy miniatures where intricate carving is required. It is also suitable for adding greater detail when converting existing models.

Green Stuff can be applied to plastic, resin and metal miniatures and then moulded into shape. When fully cured, it is solid enough to glue other components to whilst retaining a degree of flexibility, giving it elastic qualities. It is malleable when set, allowing it to be bent into shape without breaking.

It has a work time of between one-and-a-half and two hours. Green Stuff’s cure time is four to five hours, and it reaches maximum hardness 20 to 24 hours after mixing.

The reel format contains the two components of Green Stuff – the yellow filler and the blue hardener – in one strip. To create the putty, you simply cut off the amount of reel required and knead it by hand. Successful mixing is indicated when the putty turns green.

Green Stuff is also available in stick format. The yellow and blue parts are packaged separately rather than in one reel, allowing the user greater control over the mixing quantities. By adjusting the ratio of hardener to filler, it is possible to change the properties of Green Stuff.

For a detailed guide on how to use Green Stuff in this way, please see the Kneadatite Duro Green Stuff website.

To create a slightly stiffer, harder putty for larger jobs, then Green Stuff can be mixed with Geomfix Original A+B.

Green Stuff Reel can be purchased as part of the SylCreate Modelling Putty Kit. The Kit also contains Geomfix Original A+B and Magic Sculp, offering a cost saving on buying each of the putties individually.

“I’ve been using Green Stuff for over 30 years now and it’s helped me make my living as a freelancer.”

“The firmness and texture of Green Stuff make it great for adding details like insignia. The stiffness also allows it to be self-supporting, which is ideal for items like hair. The flexibility is retains when cured allows you co cut strips for belts or webbing which will conform to the shape of a figure and can be glued into position.” 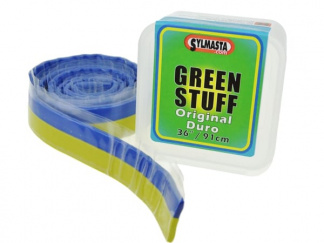 You're viewing: Green Stuff Reel (90cm) £12.02 inc. VAT
Add to basket
Cookies are used to ensure you are given the best experience on our website. By continuing to browse the site you are agreeing to our use of cookies.OkPrivacy policy