The XL Putty Kit contains double the amount of Green Stuff, Magic Sculp and Geomfix Original for an even greater cost saving

It comes with twice as much putty as the Standard Modelling Kit, offering a saving of over £13 compared to purchasing Green Stuff, Magic Sculp and Geomfix Original as individual items.

Each putty has different properties for different model making and sculpting tasks. Having a supply of all three enables the most suitable putty to be used for the work at hand.

Green Stuff
Green Stuff is a favourite of war gamers due to its ability to hold fine details well when intricately carved. The stickiest of the three putties, it detains a degree of flexibility once cured and is malleable when set. This allows it to be bent into shape without breaking.

Many scale model makers use Kneadatite Green Stuff to add highly detailed pieces – such as belts, braces and insignia – to larger figures sculpted from Magic Sculp or Geomfix.

Magic Sculp
Magic Sculp has a fine grain structure and soft consistency, meaning it does not shrink or crack when formed in large structures. When smoothed with water, it sets to an ultra-smooth finish, making it popular with sculptors and restorers.

In model making, Magic Sculp is used to create masters, assembles figures and carry out conversions. It has a work time of up to three hours, giving it the longest cure of the three putties.

Geomfix Original
When first mixed, Geomfix Original is sticky like Green Stuff. It soon loses this stickiness once curing begins, and ends up setting to a ceramic like material harder than either of the other two putties.

These properties allow it to combine the best of both Green Stuff and Magic Sculp. It can hold intricate detail like Green Stuff at the same time as being used to build larger models and sculpts, like Magic Sculp.

The versatility of Geomfix mean it is used by model makers, china restorers, doll repairers, jewellery designers, pattern makers and industrial users. It can be thinned with a little acetone, enabling it to penetrate the finest of cracks when gap filling.

Mixing Modelling Putties together
The putties in the SylCreate Putty Kit can also be mixed together to alter the characteristics of the putty. Combining Green Stuff with Magic Sculp for example will create a stiffer, harder putty – but one which still maintains the flexibility of Green Stuff.

For more information, please read our guide on the benefits of mixing modelling putties. 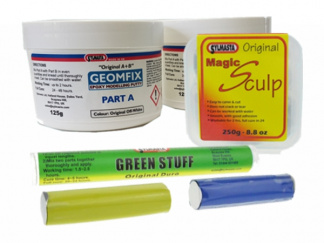 You're viewing: Modelling Putty Kit XL £50.88 inc. VAT
Add to basket
Cookies are used to ensure you are given the best experience on our website. By continuing to browse the site you are agreeing to our use of cookies.OkPrivacy policy