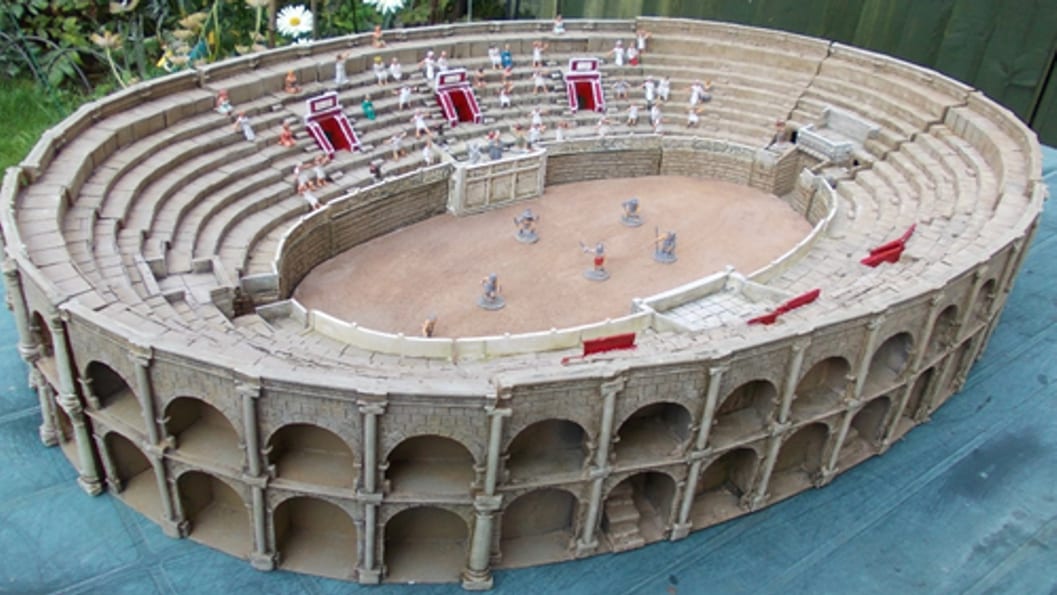 Rome wasn’t built in a day. Parts of it can though be recreated inside two years if you happen to have the skills of Paul Hallett, a man who has used casting resin and silicone rubber moulds to create an extraordinary collection of resin cast Roman amphitheatres, Tudor buildings and rare tanks.

When Paul first got in contact with us, he described himself as an amateur who wanted to show what an average modeller can do with SylCreate products. Once Paul’s work on resin cast buildings began rolling in, it became clear that he was doing himself a disservice with that average modeller tag.

You do not need to look any further than his eight-section Roman amphitheatre to see that. Paul describes it as his biggest ever project which took two years to complete, using Polycast G27 Casting Resin and Sylmasta 370 Silicone Moulding Rubber. Who better to take us through how it was done than the man himself?

“Every external resin arch came from one 370 Mould and the columns were half reliefs and covered the joints. This illustrates just how durable and long-lasting a mould made from 370 Silicone Rubber can be,” explains Paul.

“Never mind the quality, look at the width, as they say! I took the amphitheatre to local shows and eventually sold it to a dealer who was unsurprisingly involved with gladiator figures. He got it from me at a bargain price, simply because it was becoming too difficult to store.”

Despite the problems that come with finding somewhere to keep a massive replica of a Roman amphitheatre, Paul still views it as one of his finest pieces of work. He has been a modeller for many years now and first became a SylCreate customer when meeting the team at the IMPS at Telford nearly 20 years ago.

“I use G27 Resin and 370 Moulding Rubber in all my casting and the quality of the resulting mould is always extraordinary,” says Paul, before going onto explain his mould making process. “I always make my moulding boxes out of good quality artists’ mounting board and will both stick and tape all the edges. It’s time consuming but worthwhile as you can make the mould to the size of the object to be cast, minimising all waste.”

“When you make your first resin cast, you can see where you have used superglue on the original master as it comes out as a slight sheen on the cast. The first coat of paint obliterates the sheen, but that gives you an idea of how good 370 Moulding Rubber is.”

Paul tries to avoid wasting any resin when he casts. “I always have a small mould ready to catch any resin; waste not one drop! And I always use a cocktail stick to work along the mould, eliminating any bubbles.”

“If there are imperfections, then these can be corrected fillers. I tend to use Green Stuff for this as you can shape it precisely to fill voids in the casting. Finally, you should always be aware of the huge difference which temperature can make to cure time. A hot summers day is really not a good time to cast.”

Grand Roman structures are not the only historic buildings which Paul will resin cast. He is a master of terraced houses and Victorian pubs for the after-market model railway market, and he has made his own kit of a Tudor building – which Paul says again highlights the benefits of 370 Moulding Rubber.

“I get around 20 complete buildings from a 370 Mould before the mould starts to break up. Making this as component parts means I can produce any set of variations. I particularly like the way that tiled roof sections come out with G27 resin – in my view, they are vastly superior to card roofs.”

“Any warping can be corrected by a few seconds in hot water and with delicate parts, I will always demould before the resin has fully cured as delicate items can break if you try to demould them once they have cured completely.”

“The resulting resin sections are normally glued together with superglue and a light touch with wet and dry will roughen the edges enough to improve the bond. I normally base using artists’ mounting board.”

“The finished building is strong and durable. By the second cast, I have worked out exactly how much resin to use and I usually build in threes. The completed items end up at shows in the bring and buy.”

Away from buildings, Paul has also dabbled in military modelling. Some years ago, he had a commission from a wargamer to build rare Italian tanks and SP guns. “I did rare tanks for a while as resin casts; left and right track assembly, upper and lower hull and turret, this allows you to cast everything flat in single moulds and end up with a 3D item. It was a useful way of building my skills.”

In more recent times, Paul has turned his hand to sculpting, making a set of waggon loads for a wargames company to go with a series of laser cut waggon kits. It was his new-found love of Magic Sculp which initially prompted him to get in contact after reading our article about the benefits of mixing modelling putties.

“I have been working with Magic Sculp for about a year and have found it to be a revelation,” Paul explains. “I have used it to carve miniature wine bottles, goblets, plates and chalices to make the master for a waggon full of items hastily looted from a country house or religious building. These valuables have been chucked into wicker baskets made from Green Stuff and piled onto the back of the waggon.”

As well as the looted goods, Paul also decided to sculpt some tiny geese with their arms outstretched in alarm because of the ransacking. To do this, he made the body of the geese from Magic Sculp and the wings and the legs from Green Stuff. Paul then used a micro drill to pass a fine wire through the Magic Sculp, which anchored in place the parts made from Green Stuff.

“I am reasonably pleased with the overall effect. The geese look quite crude in the photos, but from 30cm away they are startlingly effective. I am particularly thrilled with how thin Magic Sculp allows you to make the necks of the geese.”

“As you can see, I have built my hobby around SylCreate products. I love creating things from scratch and moulding and casting with SylCreate’s rubbers and resins has allowed me to take on very large projects and multiple builds through the years at a very economical price.”

Paul signs off by saying: “Happy modelling from Paul the average modeller.” That word again – average. We do not think there is much average about a man who can cast detailed historical buildings and a great Roman amphitheatre from resin. Rome wasn’t built in a day, after all…