Silicone Mould Release Agent prevents two separate rubber moulds from sticking to each other during the making of two-part split moulds.

When making a split mould, the first half is allowed to fully cure. Before the creation of the second half, a light coating of Release Agent is applied to the face of the cured part and allowed to dry.

The Mould Release Agent will stop the liquid silicone poured into the mould box to create the second part from curing to the first part.

There is no need to apply release agent to the original item which the mould is being taken of. This can result in the final mould lacking fine detail by preventing the silicone from coming into close enough contact to pick out intricacies.

We have detailed the whole moulding and casting process including the use of Release Agent on the Showcase Section of our website.

There is a video showing how to make and use a two-part silicone mould for resin casting, which is also available under the Videos tab on this product page.

Mould Release Agent is available in 50ml or 500ml sizes. The 50ml bottle comes with a brush cap in the lid.

It can also be purchased as part of the SylCreate Resin Casting & Silicone Moulding Kit. Included in the Kit is 380 Silicone Moulding Rubber, Polycast G26 Polyurethane Casting Resin and a range of other accessories. The Kit offers a cost saving on buying moulding rubber and resin separately. 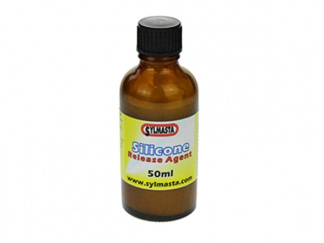