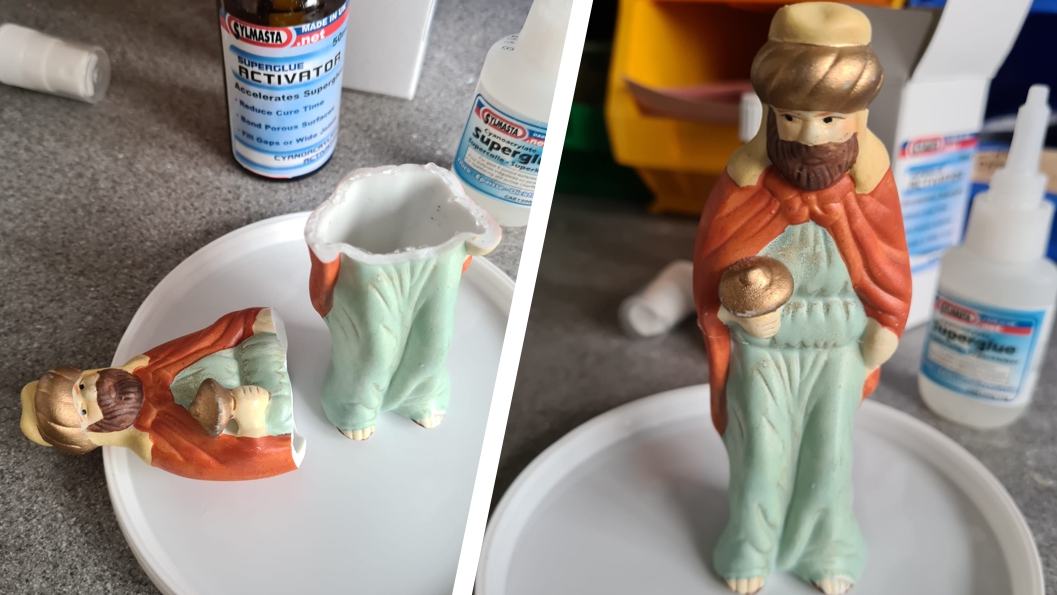 ‘Twas the week before Christmas, when all through the house; Not a creature was stirring, not even a mouse… and yet, somehow a vintage, passed-down-through-the-generations Christmas decoration ended up in need of repair.

Not quite the version of the famous Clement Clarke Moore poem you were expecting, but the scenario it describes is probably familiar. If you do not have at least one Christmas decoration breakage every year, then you are in the minority.

Whether it be Jesus, Mary, Joseph, the wee donkey or one of the shepherds who ends up looking pretty sheepish when the cat snaps his head off, Christmas decorations are in need of frequent repair once they are hauled out of the loft every October. That is then you put yours up, right?

There are two reasons why decorations are so susceptible to damage. The first is that they spend months locked away in damp, dingy conditions. That is not good for them. One solution to this is obviously to leave them up all year round, but that might make you look a little weird… according to my partner anyway, who gave that response when I suggested it to her once.

The other reason that decorations break so frequently is because they are old, brittle, family heirlooms kept despite the fact they have clearly seen better days. There is something satisfying about putting the same angel on the top of tree that has adorned it for the past 30 years, even if said angel has yellowed to the point that it looks like Bart Simpson.

Nobody wants to throw away their baubles, their stars or the nativity scene in the window. Those same decorations are as big a part of the traditional Christmas as bucks fizz with breakfast and a punch up over a Scrabble abbreviation shortly after the Queen’s Speech.

Which is why when decorations break, it can be a disaster on a par with travelling 90 miles on a donkey to Bethlehem, only to find out that every hotel in town is booked up. This is the situation that one family in Sussex found themselves in (the decoration, not the donkey) when one of the Magi was accidentally snapped in half by an unknown party.

Christmas would not be Christmas without this chap from Egypt bearing frankincense. And so, the family journeyed to the door of SylCreate, desperately hoping that someone could repair their decoration in a modern-day Christmas miracle.

One of SylCreate’s wise men instantly got to work, opting to use Sylmasta CAE1500 High Viscosity Superglue for the repair. CAE1500 offers strong bonding between all materials, including ceramic, porcelain, plastic, metal, wood, paper and some fabrics.

It is that a good an adhesive that Joseph himself probably would have used it in his carpentry business, had cyanoacrylate superglue existed in Israel 2000-odd years ago.

The high viscosity of CAE1500 gives it a slightly longer bonding time of between 10 and 45 seconds on non-porous materials, depending on the material type. This is important in model making, restoration or DIY tasks, because if two parts being bonded are not attached correctly with an instant curing superglue, then it can be difficult to rectify the mistake before it sets.

CAE1500 was applied to the breakage point on the bottom half of the king. Superglue Activator was brushed onto the top half to accelerate the cure time, with our SylCreate wise man clearly confident in his glueing abilities.

Other instances where you might wish to speed up cure time include applications when significant volumes of glue are required, such as gap filling or bonding wide joints. Activator also prevents glues being absorbed by porous surfaces.

With CAE1500 spread on one half of the king and Activator on the other, the two pieces were then pushed back together. After holding them in place for around 10 seconds, excess glue squeezed out of the joints was wiped away.

The Magi had been perfectly healed, with no glue or crack lines visible. He was back on his feet, permanently repaired, and ready to deliver his gift to Baby Jesus once more.

Need to undertake Christmas decoration repair of your own? Want to stock up on glue just in case of future Christmas emergencies? The Superglue & Activator Kit contains High Viscosity, Multipurpose and Penetrating Superglue, Activator and Ultra-Fine Nozzles to cover you for every kind of glueing task.