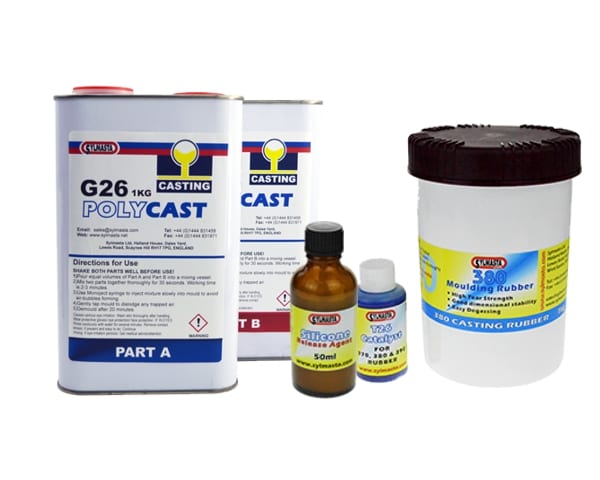 Sylmasta casting and mould making products are used by model makers, kit builders and industrial users to produce detailed reusable silicone moulds and high quality resin casts. Resin, moulding rubber and all the accessories needed for the process can either be purchased separately or in one easy-to-use Sylmasta Casting Kit complete with instructions.

Sylmasta Casting Kits are comprehensive kits which contain silicone moulding rubber, casting resin, mould release agent and all the accessories needed to start resin casting and mould making. Kits are available in two sizes and come with full instructions, making them ideal for both beginners and more experienced users.

Sylmasta Silicone Moulding Rubber is professional quality silicone rubber used for making high-quality, reusable moulds. Two hardnesses are available alongside mould release agent, which is used to prevent rubber sticking to itself during the making of split moulds.

Softest grade of Sylmasta Moulding Rubber with high flexibility for creating moulds with deep undercuts. Has a pot life of 45 – 120 minutes and a de-mould time of 10 hours

Stiffer grade of Sylmasta Moulding Rubber, offering greater dimensional stability and tear strength. Has a pot life of 45 – 120 minutes and a de-mould time of 8 hours

Mould Release Agent is used when making a split mould to prevent the two parts from sticking to each other. Comes with a brush cap for easy application

Polycast Casting Resins are non-shrink polyurethane resins for creating high-quality resin casts. A range of viscosities and cure speeds are available. Polycast Resins set to beige as standard. Should a specific coloured casting resin be required, then we have the capability to custom-make a resin to any RAL or PANTONE colour.

Medium viscosity polyurethane resin for casting larger parts of 0.5mm and upwards. Has a pot life of 3 – 4 minutes and a de-mould time of 30 minutes to 10mm thick

Low viscosity polyurethane resin for casting parts as small as 0.5mm thick. Has a pot life of 150 seconds and a de-mould time of 25 minutes to 10mm thick

Low viscosity polyurethane resin for casting parts as small as 0.5mm thick which sets white rather than the beige colour of standard G27

Very low viscosity polyurethane resin which is extra searching for picking out the finest details. Has a pot life of 2 minutes and a de-mould time of 15 minutes to 10mm thick

Optically clear, non-yellowing polyurethane resin which is resistant to UV. It makes water clear casts and is used for embedding and encapsulating objects.

One-piece syringe for precision dispensing of casting resins. Comes with a curved tapered tip which can be trimmed to the desired width

Used to dispense resins and activators. Pipettes are available in 1ml and 3ml sizes and can be purchased in packs of 10 or boxes of 500.

A useful accessory for mixing both resins and silicone rubbers in the casting and mould making process. Sold in boxes of 100 stirrers

Plasticine is used in the creation of two-part moulds during the casting and mould making process. It is sold in 150g packages

To see how easy it is to start casting and mould making using a Sylmasta Casting Kit, then please see our Showcase article on How to make and use a two-part silicone mould for resin casting, which includes an instructional video.

As well as model makers, kit builders and industrial users, the Casting Kit is also used by those in the resin jewellery industry for producing one-of-a-kind pieces. You can see examples of jewellery made using Sylmasta casting and mould making products on the website of a resident resin artist, The Pea Hive.